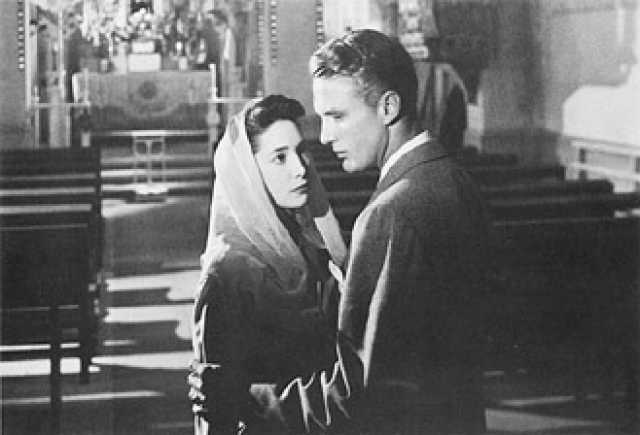 Szenenphoto aus Bullfighter and the Lady, © Republic Pictures
Remarks and general Information in German: A young American film producer Chuck Regan (Stack) aspires to be a bullfighter and looks to an ageing matador, Manolo Estrada (Roland), to teach him. Manolo reluctantly agrees. Regan is brash, exhibitionistic and inconsiderate. Manolo is mature and serene. As Paul Schrader puts it, 'Regan is an individualist, Manolo is a formalist'. Regan's exhibitionism-his desire to perform in the bullring without the methodical training of the apprentice matador-leads to tragedy.

This semi-autobiograhical film, part romantic action picture, part documentary-perhaps the most authentic portrayal of bull-fighting to have come out of Hollywood-was the first on which Boetticher put his preferred name 'Budd'. It has a primal quality that looks forward to the Ranown cycle. Bullfighting is more than a sport, it is a ritual. Schrader has noted the continuing tension in Boetticher's films, between 'sport and ritual, individual and icon', a tension that is played out through irony in the westerns but remains intriguingly unresolved in The Bullfighter and the Lady. Regan is mysteriously transformed in the ring from exhibitionist to icon, from an aggressively individualistic American to a matador performing a timeless ritual.

To play on double bills the film was brutally cut by nearly 40 minutes but has been since restored by the UCLA Archive to Boetticher's original edit of 124 minutes. The title is a Hollywood concoction; Boetticher's chosen title for his original story (which was nominated for an Oscar) is 'Torero'. (http://www.sensesofcinema.com/contents/festivals/01/15/biff_boetticher.html)

Bullfighter and the Lady is a motion picture produced in the year 1951 as a USA production. The Film was directed by Budd Boetticher, with Robert Stack, Joy Ann Page, Gilbert Roland, Virginia Grey, John Hubbard, in the leading parts. We have currently no synopsis of this picture on file; There are no reviews of Bullfighter and the Lady available.

The information above does not purport to be exhaustive, but give the level of information to our database at the time of last update. All figures are best knowledge and belief researched to, legal claims arising from incorrect or missing information are expressly rejected.
Due to the current law in some countries can be held responsible person who addresses refers to having a criminal content spread may or criminal content and pages further refer, unless he closes clear from such liability. Our links below are researched to the best of my knowledge and belief, but we can not accept in any way for the content of these web pages and links from us any liability. We provide this explanation by analogy from all countries and all languages of. Quotations, if not otherwise marked, in the usual right to quote with identification of the sources added.
The copyright lies with the authors of these quotes - Bullfighter and the Lady (1951) - KinoTV Movie Database (M)

DVD Bullfighter and the Lady