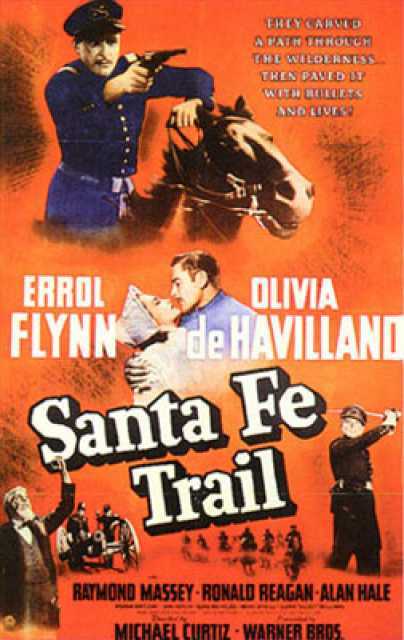 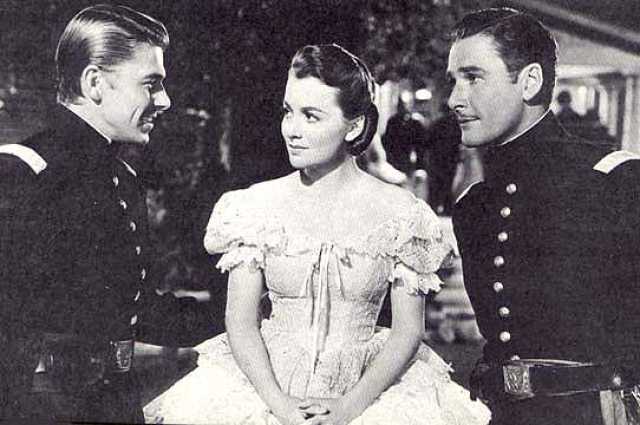 Szenenphoto aus Santa Fé Trail, © Warner Bros. Pictures, Inc.
Reviews in German: After making six of their nine films together in a five year span, Errol Flynn and Olivia de Havilland found themselves cast together again in Santa Fe Trail (1940). The two actors felt a strong attraction to each other but De Havilland refused to let their personal relationship go beyond friendship. Despite the fact that they had an undeniably intense on-screen chemistry together and often played historic screen couples during the greatest era in film, De Havilland later admitted (in The Films of Olivia De Havilland by Tony Thomas) that Flynn came on too strongly with her, often "Éscaring her with his rough humor." And De Havilland, knowing that he was married to the actress Lili Damita, knew that there could only be trouble if she returned his advance. "It's a good thing I didn't - he would have ruined my life," she later remarked. But the affectionate relationship between them remained, and at times, would lead to some outlandish behavior as when De Havilland and John Huston (whom she was involved with at the time) ran into Flynn at a Hollywood party. One thing quickly led to another and soon Flynn and Huston were breaking the place up in a terrific fist fight, neither besting the other, but most certainly ruining their very expensive imported clothes.

De Havilland and Flynn were at the peak of their careers in Santa Fe Trail, but so was the rest of the cast and crew. You can sense the fun they all had making what is essentially a Western fantasy (Hollywood always played fast and loose with the facts), directed by studio favorite Michael Curtiz and photographed by the ever reliable Sol Polito. Despite that, things may have seemed a bit ominous at first for some cast members like Ronald Reagan. The future President found himself cast in the movie at the last minute as George Armstrong Custer, partly due to his success as the "Gipper" in Knute Rockne, All American (1940). When he showed up to see the wardrobe man on the first day of shooting, Reagan saw him toss aside uniforms designed for Wayne Morris (who was originally cast as Custer) and cart in costumes hurriedly sewed together for Reagan's use. As the worried actor recalled in his biography, Where's the Rest of Me?: The Ronald Reagan Story, co-written with Richard Hubler, "It occurred to me then that it would be just as easy someday to throw my clothes in the corner and hang some other actor's in their place. It's a highly competitive business."

In Warner Brothers' recreation of a famous chapter in American history, the film's heroes - all recent graduates of West Point and future leaders of both the Union and Confederate armies - head out along the Santa Fe Trail but soon take a detour off that important caravan route from Missouri to New Mexico. Instead, Santa Fe Trail concentrates on the conflict between the Army and the abolitionist John Brown. In reality, no one but Flynn's character, J.E.B. Stuart, graduated from the Point in 1854, the year given in the film, but all of the others did graduate from there at different times, and in fact, Robert E. Lee was in charge of the troops at the Point and of the attack at Harper's Ferry to capture Brown. That raid is a reasonable facsimile of the real attack and Raymond Massey's masterful performance captures the almost insane religious zealotry of John Brown.

Sitting squarely in the middle the fence, refusing to side with either the South or the North, screenwriter Robert Buckner tries very hard to simplify matters as illustrated by the following dialogue delivered by J.E.B Stuart (Flynn) when he is asked about the dilemma between slavery and insurrection: "Our job is to be a soldier, not to decide what is wrong or right." There are other statements by De Havilland's character, Kit Carson Holliday, warning against the rift between slavers and anti-slavery people, and the inhumanity of it all. But there are almost equal arguments for a slow progression towards freedom and a conservative eradication of slavery in the South. So, although the film may be politically murky and somewhat confused historically, it never falters as an entertainment.

Among the stellar supporting cast of Santa Fe Trail are Alan Hale, Guinn "Big Boy" Williams, William Lundigan, Ward Bond, and Van Heflin, some of them rising stars and others destined to become household names among television viewers (Ward Bond became the star of TV's popular Wagon Train series, 1957-1961). But perhaps there is no success story amongst them as poignant as Errol Flynn's rise and fall. Reaching his peak in the mid to late forties he soon turned to a debauched life full of drugs and booze, often wandering off aimlessly for long stretches aboard his sailboat, the "Zaca." Eventually, he returned to the screen, specializing in drunks; after all, he played them so well, particularly in The Sun Also Rises (1957) and Too Much, Too Soon (1958), in which he played his late friend John Barrymore, also a notorious alcoholic. His final stab at fame was his autobiography, My Wicked Wicked Ways, published posthumously in 1959, the year that he died. The dashing, adored athlete and leading man was found dead of a heart attack at the age of 50. It was often said that Flynn's coroner thought he was examining the body of a much older man. Olivia de Havilland later recalled in The Films of Olivia de Havilland by Tony Thomas that she first met Flynn when they were testing together for Captain Blood (1935). She asked him what he wanted most in life. "Success" is what he answered. De Havilland felt that it was this fervent pursuit of success that compromised Flynn and caused him to - as Thomas puts it - "Étrod a path that eventually led to veritable self-destruction." (Joseph D'Onofrio, Turner Classic Movies)

Santa Fé Trail is a motion picture produced in the year 1940 as a USA production. The Film was directed by Michael Curtiz, with Ward Bond, Alan Hale, William Lundigan, Raymond Massey, Henry O'Neill, in the leading parts. We have currently no synopsis of this picture on file;

The information above does not purport to be exhaustive, but give the level of information to our database at the time of last update. All figures are best knowledge and belief researched to, legal claims arising from incorrect or missing information are expressly rejected.
Due to the current law in some countries can be held responsible person who addresses refers to having a criminal content spread may or criminal content and pages further refer, unless he closes clear from such liability. Our links below are researched to the best of my knowledge and belief, but we can not accept in any way for the content of these web pages and links from us any liability. We provide this explanation by analogy from all countries and all languages of. Quotations, if not otherwise marked, in the usual right to quote with identification of the sources added.
The copyright lies with the authors of these quotes - Santa Fé Trail (1940) - KinoTV Movie Database (M)