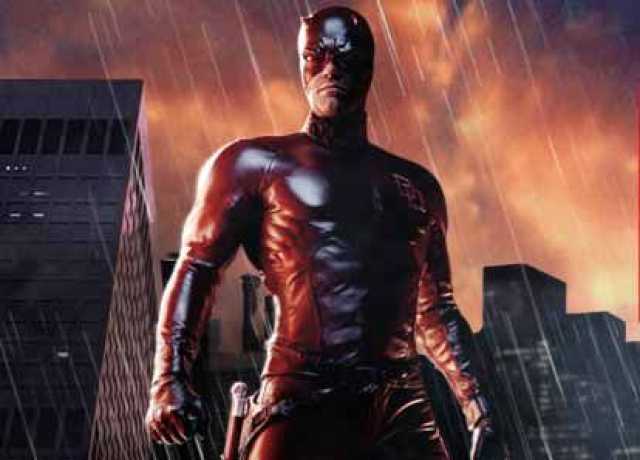 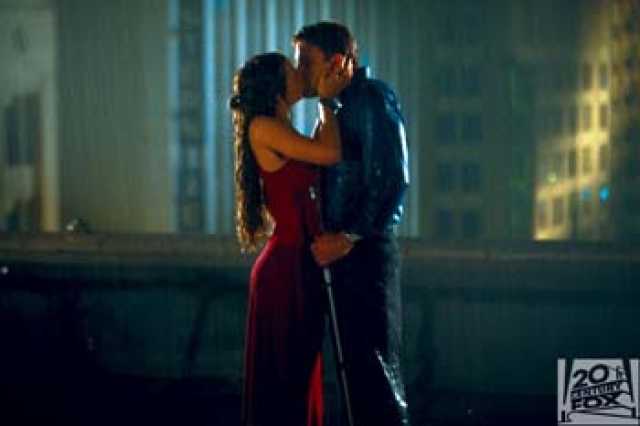 
"The screen treatment of the classic Marvel superhero, directed by Mark
Steven Johnson (Jack Frost, Simon Birch), ranks up there with Batman and
X-Men for its melancholy, dark wit, meticulous eye for detail, baroque
mise-en-scène, and crackling energy. It opens with a seemingly dying man
telling his tale: Matt Murdock (Ben Affleck), a/k/a Daredevil, relates his
cornball origins. A tough kid growing up in Hell's Kitchen, he's blinded by
some of those pesky toxic chemicals, which also increase his remaining senses
to near-unbearable intensity. Driven by a never-say-die fearlessness, he
hones these skills into superpowers and, after witnessing his palooka dad
getting bumped off by the mob, vows to fight injustice: blind lawyer by day,
red-leather-clad whirligig by night.

Johnson renders the action scenes with kaleidoscopic drive pulsed by a
terrific soundtrack and weakened by sometimes geeky CGI effects. Jennifer
Garner makes a porcelain ninja as Elektra, DD's squeeze/nemesis, but is not
as appealing as Jon Favreau as his wisecracking buddy. Colin Farrell belches
beautifully as the lethal Irish-pub rat Bullseye. And oversize teddy bear
Michael Clarke Duncan, playing the monolithic Kingpin, brings a chill to
lines like "No one is innocent." Things get a little busy and silly toward
the end; my advice: save some for the sequel." (PETER KEOUGH in The Boston
Phoenix)


"'DAREDEVIL," the blind hero of this poor man's "Batman" played by Ben
Affleck in autopilot mode and a red leather suit, has had his other senses so
heightened he has to sleep in a sensory deprivation tank.

Alas, you may feel like you've spent an hour and half soaking in such a
device after sitting through Mark Steven Johnson's mind-numbing, would-be
comic-book franchise, which often seems as blind as its hero - not to mention
deaf and dumb.

Someone's lack of confidence in writer-director Johnson's storytelling is
betrayed by the lengthy voice-over narration that opens the movie.

A seemingly dying Daredevil relates a lengthy series of flashbacks recalling
how Matt Murdock (Scott Terra), a bullied Hell's Kitchen teenager, was
blinded by an accident - which somehow enhanced his hearing so much it now
functions as a kind of sonar.

Later his father, dockworker Jack "The Devil" Murdock (David Keith), a
washed-up boxer trying to make a comeback, is killed by the mob when he
refuses to take a dive.

It's fun to imagine how many times Affleck, an Oscar-winning screenwriter
(for "Good Will Hunting"), had to read corny lines like "I waited outside for
my father. In some sense, I'm still waiting" without breaking up.

As the grown-up Matt, a pro bono lawyer who likes to proclaim "justice is
blind," Affleck dons Daredevil's ridiculous horned suit to go on vigilante
patrol - and our first impulse is to wonder if he has a Daredevil-mobile with
matching red upholstery.

Nearly half the film is over before the story gets rolling - and we finally
see Elektra (Jennifer Garner), a Greek-American heiress whom Matt meets cute
in a playground martial arts duel.

Unfortunately, Affleck and Garner, the star of TV's "Alias," exhibit no
chemistry together after this first encounter - even though the film pays
homage to "Spider-Man" with a soggy love scene set in the rain.

After Elektra's tycoon father (Eric Avari, a fixture in Adam Sandler films)
is killed in a mob hit that Daredevil is unfairly blamed for, she turns into
an avenger herself - but, in this case, mourning definitely doesn't become
Elektra.

Hong Kong's Cheung Yan Yuen was brought in to choreograph the "Matrix"-style
fights, but they're so badly lit, choppily edited and digitally enhanced that
they don't have a whole lot of impact.

Director Johnson ("Simon Birch") wastes a good cast, including Michael Clarke
Duncan as chief baddie Kingpin, who turns out to be about as menacing as the
Jolly Green Giant.

Also on board with little to do are Jon Favreau, as Matt's lawyer partner,
and Joe Pantoliano as a remarkably mild-mannered reporter for The Post. (This
newspaper is also represented by numerous front pages and an accident
involving a Post truck on what is unmistakably a Los Angeles street
unconvincingly being passed off as Manhattan.)

Affleck, who can be a fine actor in small, character-based films like
"Changing Lanes," reverts to the condescending, frat-boy smirk he usually
reserves for his work in big-budget blockbusters.

Not so Colin Farrell, who delivers some much-needed pizazz in his tiny role
as Kingpin's multi-pierced henchman, Bullseye, who can turn paper clips,
pencils and even shards of stained glass into deadly weapons.

It's Farrell's gleeful villainy - delivered, for once, in his native Irish
brogue rather than his usual fake-American accent - and his climactic battle
with our red-clad hero in a church (that literally has bats in the belfry)
that keeps "Daredevil" from being a total snooze.

The flick misses the bull's-eye by such a length that nobody except hard-core
fanboys and leather fetishists will be panting for the sequel promised at the
end." (New York Post) 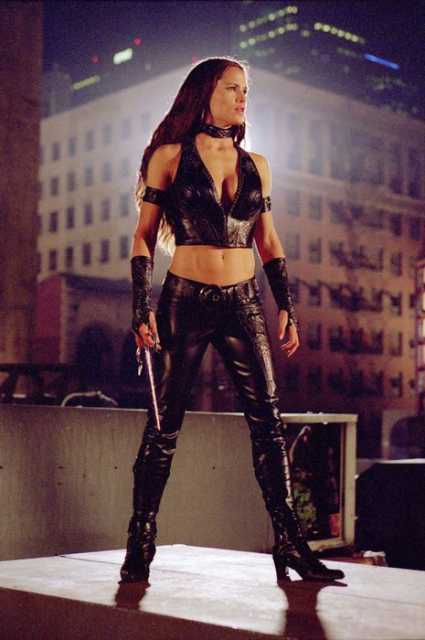 Daredevil is a motion picture produced in the year 2003 as a USA production. The Film was directed by Mark Steven Johnson, with , Michael Clarke Duncan, Colin Farrell, Jon Favreau, Jennifer Garner, in the leading parts. We have currently no synopsis of this picture on file;

The information above does not purport to be exhaustive, but give the level of information to our database at the time of last update. All figures are best knowledge and belief researched to, legal claims arising from incorrect or missing information are expressly rejected.
Due to the current law in some countries can be held responsible person who addresses refers to having a criminal content spread may or criminal content and pages further refer, unless he closes clear from such liability. Our links below are researched to the best of my knowledge and belief, but we can not accept in any way for the content of these web pages and links from us any liability. We provide this explanation by analogy from all countries and all languages of. Quotations, if not otherwise marked, in the usual right to quote with identification of the sources added.
The copyright lies with the authors of these quotes - Daredevil (2003) - KinoTV Movie Database (M)