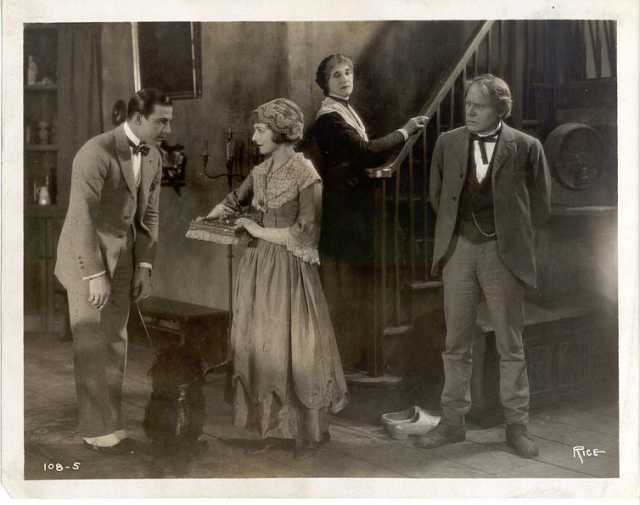 Synopsis (en Alemán)
Monsieur Grandet, the wealthiest man in his province, forces his wife and daughter, Eugénie, to submit to the regime of mean poverty. Because of her wealth, Eugénie attracts aspiring suitors Cruchot de Bonfons, a minor magistrate, and Alphonse des Grassins, son of a local banker. Grandet's nephew Charles, a wealthy young dandy, arrives from Paris with news of his father's suicide and falls in love with Eugénie, with whom he exchanges vows before leaving for Martinique to repair his fortune. Père Grandet intercepts their letters and locks up Eugénie after learning that she has lent Charles money for his voyage. His mind affected by the death of his wife, Grandet is trapped while contemplating his money and in his efforts to escape is killed by a chest of gold. Eugénie is about to sign a marriage contract with Cruchot when Charles arrives to claim her. (AFI)

REX INGRAM, maker of motion pictures. It might seem that any director of photoplays could be introduced that way, but in most cases the introduction would be misleading. It would imply that the director had become proficient in the art as well as the mechanics of motion-picture making, and the directors who know how to make pictures that have pictorial as well as kinetic quality are relatively few. Rex Ingram, however, is one of them.

He is introduced here because of his latest production. "The Conquering Power," which was at the Rivoli last week and will continue at the Rialto this week. When "The Four Horsemen of the Apocalypse" came into the Lyric Theatre last March Mr. Ingram was revealed as one of the master workmen of the screen. His previous pictures had been promising. "The Four Horsemen" was a fulfillment. Here was exceptional pictorial composition, the composition in which moving and still objects, lights and shadows, lines and masses were so arranged and controlled as to produce effects pleasing to the eye and satisfying to the dramatic appetite of the spectator. And the restraint and precision with which the players characterized their rôles, the faithfulness of the settings to their originals, the ease with which intensity of action was attained and relieved - these and other things showed the work of a man with ideas to express to whom the motion picture was a medium of expression, not a vehicle - a flivver or a truck - for the general delivery, with some damage, of the goods of the noval and the stage.

But "The Four Horsemen" was originally a novel, and, despite Mr. Ingram, it remained a good deal of a novel, rather than a photoplay, on the screen. He showed what he could do in independent cinematography, but he did not do all that seemed possible to him. So the production was a fresh promise, as well as a fulfillment - and now comes "The Conquering Power" to realize much that it foreshadowed.

The present work was adapted by June Mathis from Balzac's "Eugenie Grandet." The writer is not familiar with the original, but those who are say that Balzac has been used only as a starting point for a wide departure. However, the pictured story, though often farfetched, develops some interesting situations. Furthermore, its characters are true. They do things and have done to them things that are hardly plausible, but if you accept the artificial world in which they move, you will see them moving as true types of humanity, exaggerated somewhat for emphasis, but always fundamentally genuine.

The story, briefly, is of Charles Grandet, a young Parisian dandy, and Eugenie Grandet, his supposed cousin, a provincial girl untouched by Paris. Charles's father loses his money through speculation and commits suicide after sending the youth to the home of Père Grandet, Eugenie's father, and a monomaniacal miser. Of the love of Charles and Eugenia, of the opposition to it by Père Grandet, of its final triumphs, and of the life of these people and their friends in a French village, the story tells, and tells vividly because of the acting of the players and the direction of Mr. Ingram.

Seeing the picture, one is first of all impressed by its pictures - which isn't always the case with photoplays. Mr. Ingram tones his scenes so that they are soft, and yet distinct. There is no difficulty in watching faces, the slightest changes of expression are immediately visible, and there are contrasts in the different scenes, but never hard outlines and conflicting elements. This is primarily a matter of lighting, the most difficult and important part of photography, but it is also a matter of the selection and arrangement of objects within a scene. For example, when the ultra Parisian Charles makes his first entrance into the rural home of his uncle, his apparel, of course, proclaims the man, and, as a finishing touch, he leads a fancily barbered French poodle on a leash. Now, the best known French poodles are white, and it is a safe assumption that almost any director picked at random would have given Charles a white dog without thinking further about it - because he would have been without the pictorial sense to do otherwise. He would not have realized that a white dog would be the highlight of his picture, something on which the eye would instinctively focus itself, and in doing so wander from the shifting dramatic highlights of the scene, the expression on Charles's face and then that on the face of each other person in the room. Mr. Ingram, however, consciously or unconsciously - it doesn't matter -avoided spoiling his picture by any such blunder. Charles Grandet's dog is black, just a shadow to give the suggestion needed without becoming disproportionately conspicuous. Here is a rare pictorial touch, and it is because of many such that Charles's entrance, and other scenes literally too numerous to mention, are a pure delight to the discriminating spectator.

Mr. Ingram's facial close-ups, for example, enrich his photoplay. He uses many of them, perhaps too many, but they never give the impression that a player has stuck his or her face into the camera to grimace grotesquely and display an unblemished skin. They serve to catch significant glances and direct attention to natural expressions that reveal what is going on in the characters' minds. And their illumination gives an effective emphasis of lights and shadows without any harsh opposition opposition of fighting blacks and whites.

There is no space for comment on the plentiful excellencies of the film. It is really one of the best made motion pictures that has come to Broadway. It is so good, in fact, that one cannot refrain from remonstrating against its shortcomings. They are emphasized by its virtues.

The photoplay falls short of its ideal chiefly because it is an adaptation of a novel and retains much of the nature of a novel. Despite its many expressive scenes, a good part of its actual story is told in words. Without its subtitles it would be incomprehensible, so much so that at times its pictures seem merely beautiful illustrations of its text. This means that Mr. Ingram has advanced further in photography than in cinematography. Photography is, of course, an essential of cinematography, but it is not everything there is to it. Moving pictures should be expressive as well as correct in composition, and some of Mr. Ingram's scenes do not mean much.

But this criticism, it should be borne in mind, is made because so many of the scenes are expressive. It is because Mr. Ingram is a better, and not a worse, cinematician than most directors that the hope is expressed that he will go on and become better than he is. One feels that he can do so. When next looking for material, can he not turn away from the novel and the stage to his own imagination or to the imagination of some one else able to compose originally in moving pictures?

The acting of "The Conquering Power" is exceptionally good. Rudolph Valentino, the Julio of "The Four Horsemen," gives a finished performance as Charles Grandet. He is a pantomimist of marked ability. And Alice Terry, the Marguerite of "The Four Horsemen," meets every requirement for charm and expressiveness as Eugenie. Others whose work is especially noteworthy are Ralph Lewis as the old miser, Edward Connelly as a provincial notary, George Atkinson as his son and Mary Hearn as a servant in the Grandet household.

Eugenia Grandet is a motion picture produced in the year 1921 as a Estados Unidos production. The Film was directed by Rex Ingram, with Alice Terry, Rudolph Valentino, Eric Mayne, Ralph Lewis, , in the leading parts.