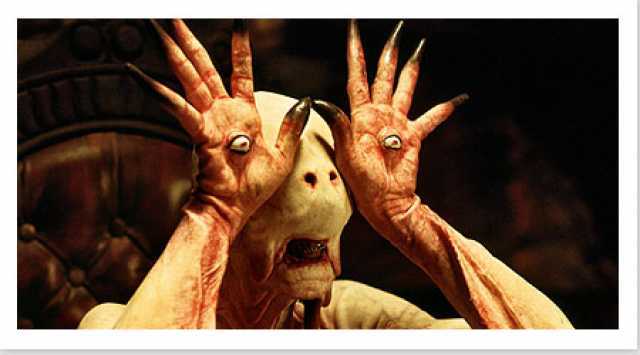 Technical specifications
Category: Feature Film
Technical Details: Format: 35 mm - Color,Length: 120 minutes
Sound System: Keine Angabe
FSK ab 16 Jahren,
Reviews in German: «Fantasydrama - In Francos Spanien flüchtet sich ein Mädchen vor ihrem Stiefvater in eine Fantasiewelt, durch die sie ein alter Faun führt. Der grossartige Film erhielt verdientermassen drei Oscars.» (tele 12/2007)
Remarks and general Information in German: 'Pan's Labyrinth' is a thrilling, violent fairy tale set in post-Civil War Spain. Ivana Baquero stars as Ofelia, a young girl who moves with her mother, Carmen, into the home of Captain Vidal, in an abandoned mill in the middle of dark, dangerous woods. Vidal is leading his team of soldiers against resistance fighters - and he will do whatever is necessary to kill every last one of them. As Vidal bosses around the pregnant Carmen, a flying creature leads Ofelia through a garden labyrinth and into an underground cave ruled by Pan who believes that Ofelia might be the lost princess of this strange yet magical place. To prove she is royalty, Ofelia must complete three tasks, each more difficult and terrifying than the previous one. Meanwhile, Vidal is becoming more and more paranoid, torturing and murdering seemingly at will. Del Toro creates a marvelous battle between good and evil, between heroes and villains, in both the real world aboveground and the mystical land below. (Filmfest Motovun)

El Laberinto del Fauno is a motion picture produced in the year 2006 as a Mexico production. The Film was directed by Guillermo del Toro, with , , Sergi Lopéz, Ariadna Gil, , in the leading parts. We have currently no synopsis of this picture on file;

The information above does not purport to be exhaustive, but give the level of information to our database at the time of last update. All figures are best knowledge and belief researched to, legal claims arising from incorrect or missing information are expressly rejected.
Due to the current law in some countries can be held responsible person who addresses refers to having a criminal content spread may or criminal content and pages further refer, unless he closes clear from such liability. Our links below are researched to the best of my knowledge and belief, but we can not accept in any way for the content of these web pages and links from us any liability. We provide this explanation by analogy from all countries and all languages of. Quotations, if not otherwise marked, in the usual right to quote with identification of the sources added.
The copyright lies with the authors of these quotes - El Laberinto del Fauno (2006) - KinoTV Movie Database (M)